Our Dining Room Is CLOSED due to Provincial Policy 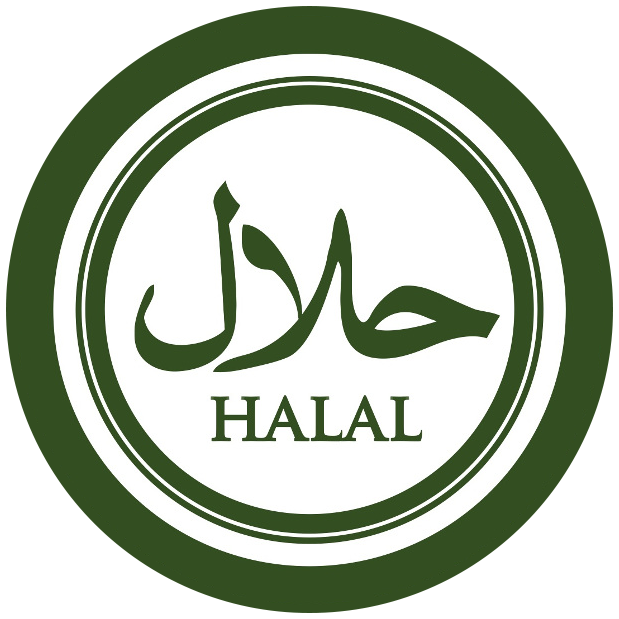 Syria has always been a country of merged cultures, it’s capital Damascus is considered to be the oldest civilized inhabited city in the world.
While we love the tradition, we seek to maintain our history and originality in the name of our restaurant, we are inspired by the amazing shape and function of the pomegranate fruit (roman) to build our traditional Eastern Restaurant and bring it along with our experience to the Western part of the world.

The restaurant name roman zaman reflects it’s identity, roman in Arabic means pomegranate, zaman means the old days where our old generation used to eat with copper cutlery and wooden boards which preserve freshness and temperature, the name has been demonstrated by both our decoration and presentation.

The restaurant is a typical Syrian House with it’s small details such as the fountain, open kitchen, engraved damascene star, chandeliers, titling and washrooms concept.

Damascene Cuisine is known for it’s rich flavour, variety and complex combinations that distinguish it from other countries. Pomegranate fruit
and molasses are built into most of our authentic dishes which give them unique characteristics. roman zaman is GTA’s first Halal Middle Eastern Restaurant, serving fresh food in an upscale environment.

Damascus is considered to be the oldest city as well as the oldest capital of the world. It is the cradle of historical civilizations, constituting a beacon of science and art over time, and a historical encyclopedia which tells a great part of the history of humanity.
In the same way, it represents a historical reference for comparing the systems of architecture and town planning over several thousand years.

Old Damascus consist of “Hamidieh” (the oldest and longest roof topped market), “Bzourieh” (Spices market), “Waraq” (Paper market), “Tfaddali ya set” (Fabrics, textiles & accessories market) and many other markets that amaze the customer with a rich varieties of choices.

Straight Street has been known since the early years of Christianity for its ramrod course through the twisting alleys of the old city of Damascus. The twisted narrow alleys show off the great architecture of the appearing balconies, and wooden windows. The dimensions of all of them was built by the measure of the arm, so when you walk through you feel it’s built for human proportion.

Crammed together in narrow alleyways, old Damascene houses provide privacy for their owners with windows that overlook the street from only the second floor upwards. Even then, the windows are covered by a wooden khis – a hand-painted shutter which keeps curious eyes at bay. Inside the house, however, windows of different sizes and architectural styles overlook the main courtyard, reflecting the light and giving the Damascene home its airy character. 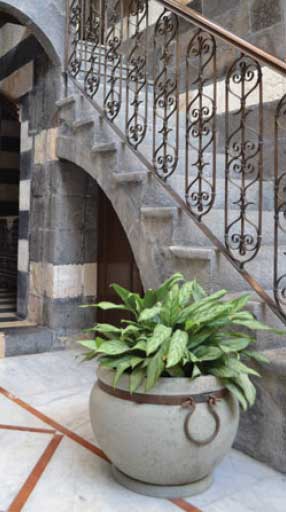 Never forget to mention the fancy porch or the flashy doorbell.
Laborers would finish decorating each room of the Damascene house by inscribing poetry and the date of completion on the wall.

In every Damascene house, there is a corridor that leads to the courtyard so that visitors don’t come straight into it and see all the family members. In the center of the courtyard sits a gushing fountain. Families usually put Damascene roses and jasmine in it to give the courtyard a perfumed scent. The design of the courtyard’s floor looks like a chessboard or a labyrinth, made from a mixture of basalt and a rosy coloured stone called ‘mazzey’. The combination of these two stones is not only visually intriguing but also serves a practical purpose; while basalt absorbs heat, ‘mazzey’ stays cool. Thus, the courtyard remains at a moderate temperature throughout the year.

Pomegranate Tree, one of the most planted and used trees, was found in every Damascene house. Pomegranate fruit is used in almost every famous Damascene meal. 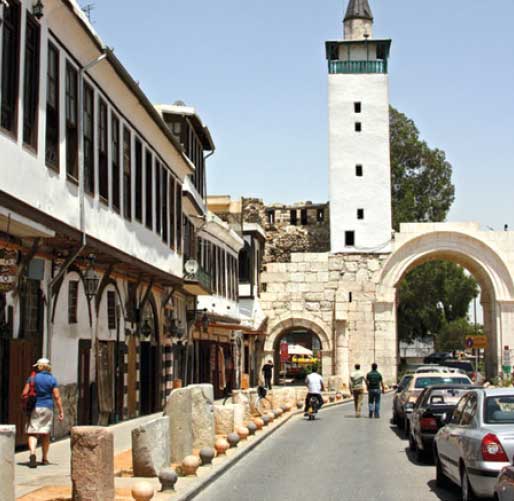 Damascene food is known for flavor, richness, variety and strange combinations that no other country has reached.
Pomegranate is an important ingredient which is almost included in every Damascene meal. It is so essential that its flavour is always what give the meal its characteristics.
Fattouch, Baba ghannouj, Kubba, Mahashi, Mutabbal, Muhammara, Msakhan are examples of important Damascene meals and appetizers that include pomegranate as an essential ingredient. It’s never complete without the reddish sweet and sour taste.
Concept Realization: The connection between the restaurant concept and the name!
It’s right at this point when we realized the great connection between this fruit and the whole concept of the restaurant.
The connection between the Pomegranate and the city, the city and the restaurant concept and between the restaurant’s function and its name. What could be better than a major fruit to take the lead in most of the meals we are willing to serve in this historical restaurant we want to create.

We were inspired by the amazing shape and function of pomegranate to build our traditional eastern restaurant in the western civilization.
Over the years we’ve scattered across the world; from east to west each one of us have travelled abroad looking for adventure, better opportunities, or sometimes merely a change of scenery.
This global dispersion exposed our group to a unique blend of different cultures, traditions, music, and cuisines.  Now that we’ve realized all, we want to bring our experiences to the west as well.
The best of both worlds open your eyes to something new.
Arabic Typography, of course, we can’t detach ourselves from our cultural roots, nor would we ever want to.  Our passion for our country is exactly why we want to bring something new.  Damascus has always been a country of merging cultures.  And while we love the tradition, we seek to maintain our history and originality in the name of our restaurant.
We started from original Arabic sensational typography, carefully made for the name of Pomegranate, which is “roman” in Arabic and we added the word “zaman” to the name so it equals; The Oldies Pomegranate.  By combining the Typo with the shape of the fruit, we reached a great typographical iconic logo, which totally expresses our idea. 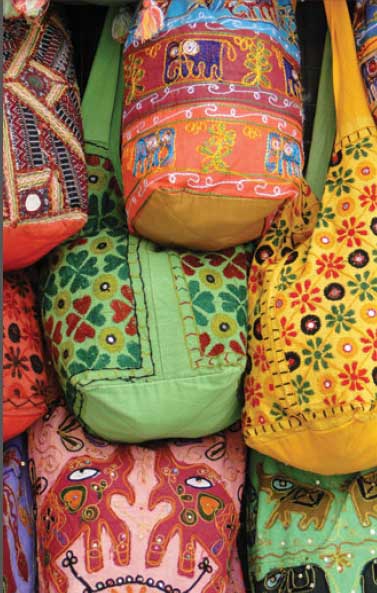 Like the Damascene house style and departments, we seek to simulate our restaurant interior with the oriental items that are found regularly inside the House. For example; wooden chairs and tables, antiques, crafted windows, planted damascene trees (Jasmine, Naranj and Pomegranate Trees), Arabic ceilings and domes, crystal and golden chandeliers that hang off the ceilings to magically capture the eye.

A great collection of antiques is what brings the theme together, such as coloured glass lanterns, which offer a blend of lightings that reminds us of the old days. Maybe holes in the ceilings, domes, or walls also bring the lighting from the outside. The old houses are made out of simple basics– wood and mud– giving warmth to the atmosphere. So old wood is an important factor in the interior & exterior design, starting from the outdoor to the decorative elements.

Fancy porch & flashy copper doorbells, and small rickety doors featured on the plain crumbling walls.
Beautifully decorated little alcoves known as ‘Dakouneh’ or ‘Mishkat’ are carved into the courtyard walls, providing a ledge for lanterns to sit on at night and sheltering their flames from the wind.  Harmony and symmetry are the most important characteristics of a Damascene Restaurant, thus, the eastern and western wings are always designed with a symmetrical number of windows and doors. To the south of the courtyard sits a ‘leewan’, a covered area which provides the guests with shade from the sun and makes for a comfortable resting spot for the hot summer days. 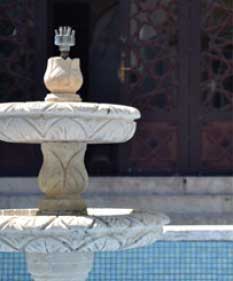 To introduce the real feel of the oriental Damascene theme, we have to accessorize everything with the proper theme.
Every detail should be counted especially when it comes to staff; they should deliver the message by their traditional costumes and behaviour. No matter what nationality they are, the look and attitude should be carefully designed to fit the image.
Clothes Materials like Linen woven on hand-looms and cotton were mainstay fabrics for embroidered garments along with belts and some shawls. White sheepskin shoes with the point in front turned up; low cut, and not above the ankle.
Trees, view, lighting, floors, ceiling, walls, and services are exported from the East.
Each table should be served by a waiter and served well with no hesitation. That is what Easterners are known for hospitality

Food is the main characteristic thing that defines the city whenever the name Damascus appears in mind. Since we aim for the restaurant, our main concern is going to be original tasty. Damascene food, begins from salads, appetizers, and richly cooked meals.

To guarantee your coming back, we ensure the standard taste, and never forget to mention our tasty secret house flavourings.

Copper is known for its great benefits in preserving food heat and taste. Our grandfathers never neglected this truth and were keen on making kitchen hold of this precious material.
And we at roman zaman are insisting on bringing the future to the ancient materials, loving the past and embracing its extracts. 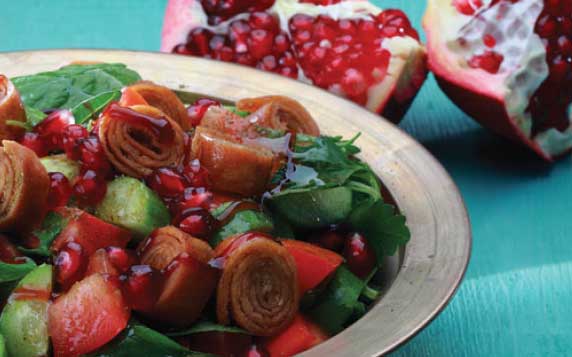 We demanded plenty of crafted copper pots, almost to cover all our serving needs. Right from copper plates, serving plates, down to spoons, pitchers, grills and so on.
Pottery can help to provide insight into past cultures. Pottery is durable, and it preserves heat and flavour inside its warm material, often surviving long after less-durable materials.
A certain style of serving is also known in the traditional food.  We are keen on providing the similar image to our guests in order to give them the impression as if they are traveling across the seas and having the experience in its homeland.

Maintaining the original image of the meal is brought by experts in the Damascene cuisine.
All food and drinks are served with a smile, breath-taking smell, and capturing arrangements.

Grilled food items are important for us and we plan to excel at it by choosing the best cuts of meat and chicken, that are grilled on using charcoal. Along with some vegetables like onions, tomatoes, and pepper, Eastern appetizers include; Yalanji, tabbouleh, hommos, burak, etc. Pottery grilled food is also very important for us as the rich taste of them will speak volumes for themselves. Inspired by the blend in other nature, we come up with the best food flavours. We are keen on giving all the guests an experience they will never forget 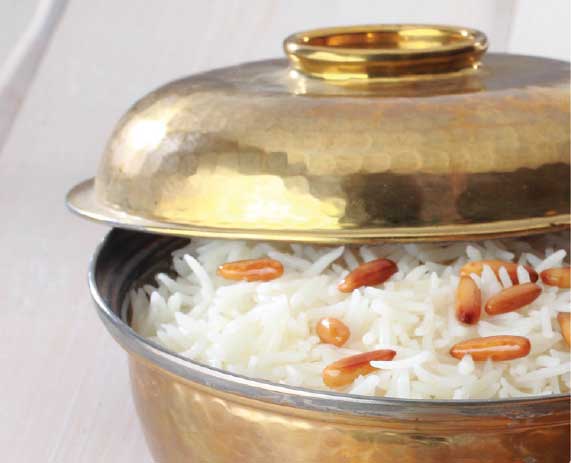 By the blend in other nature, we come with the best food flavors.Hospitality We are keen on giving all the guests an experience they will never forget

We aim to spread the oriental atmosphere across the world and give our guest an experience they will never forget in a setting that is away from the hectic lifestyle we are leading.
Concentrating on the traditional behaviours, we guarantee to lure guests and keep them asking for more, by our hospitality and generous offers and transparency.
Spread The Word! We are traditional, but we also aware of the important role of the social media. Maybe it is the best way to spread our theme across the country and demonstrate our feature to a wider audience. 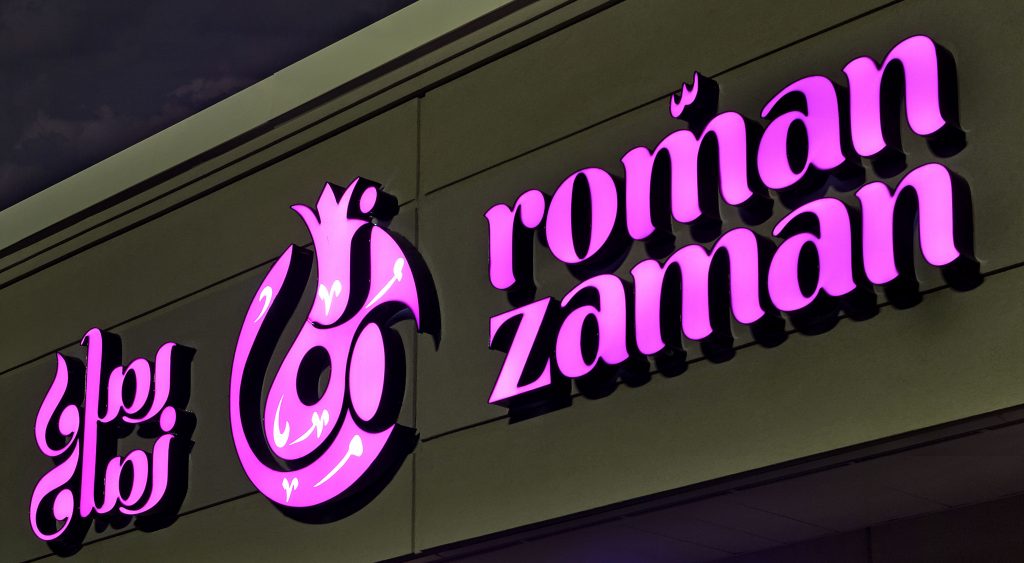